Our members are from a wide range of backgrounds including Clinical Psychologists, Occupational Therapists, Psychiatrists, Nurses,  CBT Therapists, Counsellors and Psychotherapists. 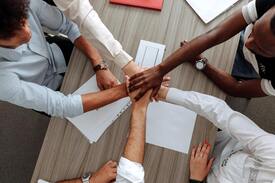 In the late 1990’s there were a small number of individuals who were trained in IPT and developed training in their local areas (London, Leicester, Durham, Edinburgh). A specialist interest group was set up to share ideas, collaborate and consider ways to further develop IPT with meetings held at different locations across the UK.

​Training programmes delivered by different training institutions across the UK have continued since then including IAPT and non-IAPT training courses. The IAPT programme also funded the provision of IPT-A training (since 2014). The IAPT training has significantly swollen the numbers of accredited IPT therapists and as of June 2020 we have approximately 800 members.

Most of the work provided to develop IPT UK as an organisation has been provided on goodwill basis; there were no funds available at all until 2000 when £9000 was donated into a bank account from Durham Training Institution when their Research Unit closed. Small amounts were used to set up a website and plan some conferences, which generated more income. In 2015 IPT UK was set up as a limited company, and a year later fees were charged to members. There are now two part time administrators employed by IPT UK, and the work by the executive members continue on a voluntary basis.

Who are the IPT UK Leadership?

IPT UK is led by the Executive and Training Committees.

The Executive Committee Chair & Deputy Chair also manage the IPT UK administration and day-to-day running of IPT UK.  Other Committee members include the Chair of the Training Committee, IAPT Leads and Research and Development Leads.

Key policies: What you need to know and where to find them: All of the key IPT UK policies can be found on the IPT UK website policies page.